One Thing Leads To Another

I guess one of the pluses of working on older equipment, besides the obvious quality of the components, is the fact there is always something else that needs attention.

Digging into the Atlas Workshop drill press has been nice.  It's a lightly used machine.  No appreciable wear on the spindle or the bushings.  For a 1940's era machine, that is almost unheard of.  But the quill return spring has been replaced.  And that is a not an insignificant issue.   Without that, the quill / spindle falls out.  Nothing is there to hold it back except the spring.  That won't do.

When I took it apart, I could see the spring was obviously a replacement.  The issue: I think it is proud of the normal position, and it won't allow the pins to lock in an adjustment.  Here is the relevant part of the diagram:

The new one sits on top of the mushroom and is held too far out to allow the pins to fit in the L shaped grooves in the cap.  I'm studying this, will probably trim that mushroom off  enough to allow the spring to fit.  I don't see a down side to that right now, but I'm still thinking and studying. The adjustment with the cap allows you to set the return force on the quill. 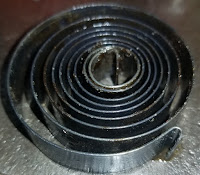 Wait just a doggone second!!!!  Thinking further, I'll reassemble and use a few spring pins and hold the spring away from the sides of the cap. If that clears the latch pins, I may make an insert for it to keep the spring from interfering with them.  I don't know if there would be enough spring to fit in the slot on the pinion shaft if I mill down the mushroom....  whew...  Pictures ARE worth a thousand words.

The KA5 contact block showed up.  And, just as I figured, the plunger is shorter.  So, a KA3 NC block can be shortened to become a KA5 late break NC block.  Good to know as I have a few 3's.  Install tonight after it cools down some.

Every heard of pleurisy?   Yeah, my pain scale is longer now than ever.  "On a scale of 1-10 how much pain are you experiencing?"  I figure pain causing imminent death is a 10.  After the for real sinus infection several years ago, my scale got adjusted.  After this bout of pleurisy....  Man, it hurt to be alive.  Not a fun few days there....  Better now.  Thank you God for that.

Kind of funny in a way, that so much of what I read in the Bible is starting to be very evident now.  "Wars, rumors of wars.  Earthquakes in diverse places."

But understand this, that in the last days there will come times of difficulty.  For people will be lovers of self, lovers of money, proud, arrogant, abusive, disobedient to their parents, ungrateful, unholy,  heartless, unappeasable, slanderous, without self-control, brutal, not loving good, treacherous, reckless, swollen with conceit, lovers of pleasure rather than lovers of God,  having the appearance of godliness, but denying its power. Avoid such people.  For among them are those who creep into households and capture weak women, burdened with sins and led astray by various passions,  always learning and never able to arrive at a knowledge of the truth.  Just as Jannes and Jambres opposed Moses, so these men also oppose the truth, men corrupted in mind and disqualified regarding the faith.  But they will not get very far, for their folly will be plain to all, as was that of those two men.

Watch your topknot... I fully expect to see four riders sweeping through the streets any day now....