45 Minutes from conception to completion.  That Sheldon lathe is a beast.  No chatter, even using a cutoff tool.  Material is A36 structural steel, one inch bolt and two, one inch nuts.  Faced one side flat on each nut, then tightened them together.  Slot was cut .075" per pass, 1400 rpm, 0.5" carbide cutter.  Wow. 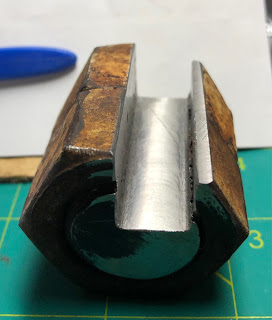 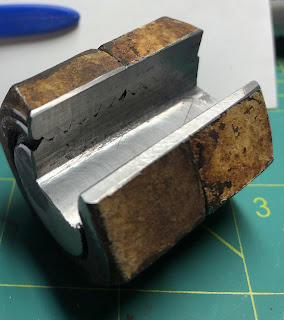 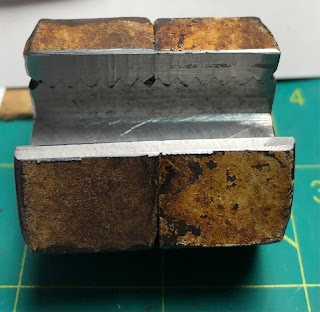 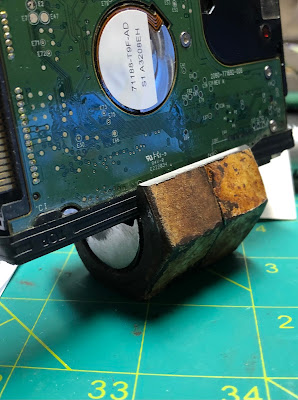 A friend gave me some long rods that were used to hold big pump jack parts on pallets.  Fun, quick project.  Now, I get to go put it out at the hardware store.

Rest for the Weary

I finally got the tee nut for the Sheldon done.  Every bleeding time I tried to go out and work, something else came up that was on fire and needed done yesterday.  I seriously need to figure out how to offload some stress.  I probably won't be making any friends when I do...

I met a farm family late last year, and bought a project from them.  I haven't done anything but move it.  But it's patient, and so am I.  They had a junk pile out there.  I've been back a couple times and brought back some really good stock to work with.  One piece was a two foot piece of 2 1/4 square tool bar.  Old two row plows that a Ford 8N could pull were usually made of one or two pieces of that size bar.  It was cut down with a torch, making that end pretty dang hard.  I chopped it off in the horizontal bandsaw.  I cut another wafer just a little bit longer than I needed.

It spent a little time in the mill, I carved out the profile I needed.  The thread on the hold down bolt is 16mm x 1.5.   I don't have much mm stuff in the shop.  Seeing as how I need a 14.5 mm drill and a tap for the hole, I was pretty much shot.  Spartan had a spare tap, so we met up and swapped lies and laughed and scratched for a while.  I hate to go home when we get to visit, there is so much to cover... 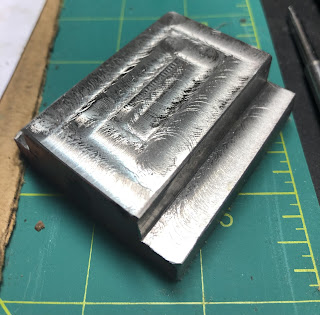 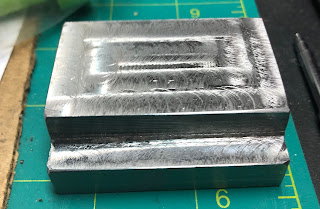 I like to use the old methods to layout.  I can't explain why, but they feel right.  So little feels right now, I can't pass up a chance to take pleasure in even simple things.  Layout blue with a big Sharpie marker, then mark the center with a hermaphrodite divider.  This isn't a rocket part, so it will be close enough. 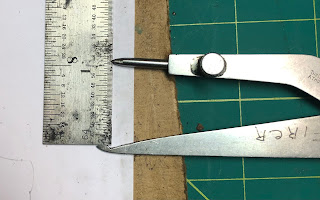 I got in the shop yesterday and blew a 9/16 hole in the nut.  It was undersized but big enough.  I used some cutting slop I made with lard, mineral oil and paraffin.  (American paraffin, a stiff wax, not British paraffin, which is coal oil or kerosene)  That tap almost fell through the hole.  Very sharp tap, but I can't help but wonder if that old lard oil mix didn't have something to do with it, too.  And the thread finish is top drawer.

There are youtubers that comment on Imperial inch measurement as bananas.  I read up on how the metric system was developed.  The Fwench started it, and it was some odd length of metal bar they used for a standard meter.  Every time the committee meets, the length changes.  I figure a MM is the width of a male maggot.  10 male maggots side by side and you have a centipedometer or CM... metric maggots...

I picked up some insert tooling, too.  This Sheldon is a hoss, they will harness it's might.  The old BXA tool post is about 8 years old, and I had a few tool holders for it.  I found a place that had a 5 pack for 70 bills, and I bought that twice over several months.  So now I have about 15 holders for the quick change tool post.  15 bucks each is awfully inexpensive, especially nowadays.

Life is still a mess, but I guess that is normal.  I complain mightily at times, then read about real problems like Glenn's parents, divemedic's daughter and grandson, Cedarq's innards, or BCE's at risk grandgirl and I'm shamed for being such a light weight.

Thankfully, I can go to the Heavenly Father and lift up the real issues and my piddly ones, too.

Cheer up!  Things are bound to get worse.  And we were born for this time.  That means we belong to this time to make the difference in it, that God put us here to make.  I lose sight of that, but there it is.

I saw this at ExTex's place.

Reminded me of a story:

Long years ago, I was a broadcast engineer in Houston.  I took care of the transmitter at the Nolan Ryan site.  It was a Townsend.  Used off the shelf components from WW Grainger.  Three visual, one aural.  Power at the combiner was 185 KW at 674-680 MHz.  Effective Radiated Power was 4 MW.  Four linear particle accelerators.  I don't remember the combined heat we had to lose, but the heat exchanger out back was about 30 x 100 feet with I don't remember how many fans.

I was hired by the chief engineer who had lost a toe due to something very close to that picture.  He was touching a meter (monitored the 50KV line for the klystron), when it arced from his finger through his body and out his toe.  Somehow they got him to UTMB and saved him.  He had that sock in a frame on his wall in the office.  He got the chief engineer job to save him suing the station (I may be wrong on that, but I think that was the story).

In old versions of the dictionary, if you looked up audacious, his picture was there.  Think Leslie Nielson, only at 127%.  He was about 6' 6", and everything was scaled up to match.  Except his ego.  It was WAY bigger.

When he quit and moved on, his duties were split.  I did the billing and ordering, as well as tower site maintenance.  My buddy did the studio maintenance and was the defacto chief, until the Hialeah Homobre was hired.

Remember those old black and white tv's?  The one's where you had to wait a few minutes while the tubes warmed up?  Remember that hot dust smell?  High voltage components attract dust and then weld it onto everything.  It's crazy hard to clean off.

My first overnight pulling transmitter one down for cleaning was eye opening.  I loaded up the squirt gun with alcohol, got the rags out, my little job table on wheels, called master control to advise them of the lower power output alarms that would be firing off soon, and started the shut down on one.

The transmitter was about the size of a bathroom, about 50 square feet, 5x10 - ish.  There were a few "Jesus" sticks, and the high voltage had a drop switch on it.  It would short to ground if you opened the door with it running.  A literal crowbar switch.  The HV ran around the top of the machine, just about  head high to me.  After touching everything remotely dangerous with the rounding stick, I opened all the doors and started scrubbing down the interior.  It was caked.  CAKED in dust...

I began to wonder if the old chief had ever really pulled maintenance out there, or if he just slept on the couch out of sight of the security cameras.  There was no way to get it cleaned out completely by 0600, so I did the best I could.  Second or third overnight, when I finally got to the back wall, I found a sticker there, invisible under the dust.  Seems the guy that was there BEFORE the old chief had even been hired was a documentarian.  He initialed and dated every dusting he'd done.  And it had been years since the transmitter had been cleaned.

So, old "Leslie"  had shirked his job.  The dust accumulated until it arced over and bit him.  He managed to use that "accident" to get the chief engineer job.  Man what a piece of work.  Reminds me of an old bromide:

"Show me a self-made man, and I will show you the product of unskilled labor."

Some data points I remember:

The remote control was a mass of small yellow wires that were like angel hair pasta.  I was scared to touch the water fall of wiring.  No way to get it back to working without a total rip out and replace.  It was on my list, but I never got to it.

The klystrons were water-glycol cooled. Water and high voltage are bad bedfellows, so there were flow switches installed in case there was a blow out.  I don't think there was a flow switch in the place that wasn't held open with an old toothbrush.

We had a huge variable transformer to adjust three phase power to the transmitters.  The bare parts of the windings were coated with something like tin to keep them from oxidation.   It was worn off, and no effort was made to replace it.  I found the proper stuff and took the whole thing down one night to re-coat it.  My phone call to mater control went like this:  "Okay, look, I will call you every fifteen minutes.  If I don't, call the ambulance.  If you don't answer, I will let it ring until you do."  Working alone on high voltage / high current isn't for the intelligent.

The billing was another issue entirely.  I found all sorts of "creativity".  I remember calling the general manager and asking for a meeting time after time after time....

Here's a neat article, and the pictures show a single visual and single aural transmitter site co-located with the studio.  We had three visual and one aural.... The Townsend transmitter looked very similar to that CCA.....   Halcyon days....