The 9mm round has a very interesting history.  When you say 9mm, everyone thinks about the military round.  The Germans used it in WW2, police and militaries all over use it now.  It's pretty common.  Ubiquitous.

There are several flavors of 9mm though and this is no where near comprehensive.  Not even close.

9mm Largo is 9x23 mm is a tapered rimless cartridge.  Used in the 1901 Bergmann.  Low pressure round.

9x23mm Winchester is a tapered, rimless cartridge, and was developed in the 1990's.  It's a high pressure round.

9x19mm is the 9mm Luger or Parabellum.   It was developed for the P08 Luger in 1901.  Continued development and used to this day.  I read that it is used by 60% of the world's police.  The NATO round runs at a higher pressure than the civilian rounds.

9x17mm is commonly referred to as the 380 Auto.  It is a rimless straight walled cartridge.  It's a popular chambering for smaller concealed carry pistols.  It has a different name in German.  It's the.....

There is a governing body for all this called SAAMI:  Sporting Arms and Ammunition Manufacturers Institute, Inc.

Check out the SAMII specifications on just about any cartridge you can think of. I got lost in there....

Well ye olde Ford F150 with the short tail is officially the F 150 Kurz.  It was a short bed to begin with, and now it is a shorter bed.  I dunno, I thought it was kinda funny in an overly specific, hoplophile, nerdy way.

Got the striker bushings in.  I can recommend these from ebay.  They aligned the trim lines on the doors and cab.  The new pins on the passenger door took most of the sag out.  Ford door no more.  Heh.  And the rattles are now loose door panels that need fastening down.  But the striker rattle is gone.

Looks like the a/c compressor is blowing oil.  So, I gotta save up for that.  Parts alone are about 500 samolians.  Twice what I paid for the for the 99 Suburban parts.  Thanks O'Brandon.

I bought an old bench top drill press almost ten years ago.  It's been sitting forlornly out in the shop.  Yesterday, I tore some of it down to start a cleanup and see if I can get it to run better.  Brass bushings, no bearings.  Jacobs 33 chuck that is sticky and tight, probably worn out.  I think I have a replacement out in the shop...  No belt guard, so I better watch my..... pate (or fivehead, I passed up forehead a while ago).  No use getting rub marks on it.  Oh, snap!  I could catch one of those eyebrow hairs now!  Those things are like a magic beanstalk.  I don't know how fast they grow but they rival bamboo. 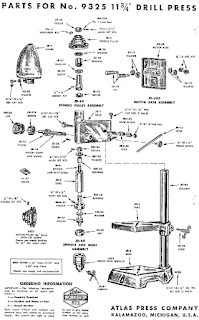 So far, usual wear for a nearly 90 year old tool.  The previous stewards did oil it on occasion, which is nice.  Filthy as a pig's hoof.  Some slop in the fit, but there may be some end play I can dial out with the  JD-17 Collar and the.... No JD-48.... interesting top hat on this one.  Pictures and details to follow.

Hoplophile - I use it as tool-lover, others may say gun nut.

Hoplo - from the Greek hoplon meaning shield or tool

Back when the kids were little, there were times they'd eat like horses and sleep like Rip Van Winkle.  Invariably, there would be a growth spurt.  And they would go back to being the feral kids I remembered.  I just had a whole month of that.  May was / is a time where I didn't have much energy for anything.  I slept some, ate some, but not much else got done.  Here's hoping I was healing more.  Probably just a bad motivator though.  At least, that's what I always figured when I had rough patches like this in the past.

1 - Got all my parts for the VFD build.  Just need to finish the install on that.  Every start on that project caused a problem.  So, I fired the parts canon.  Just need to assemble.

2 - Hired a helper to go through and deep clean the house, room by room.  I have sentimental attachments to things, and it's difficult to get past some of those.  Better to have someone else put all that stuff in a spot, so I can go through it and mourn or rejoice or remember.... then dump it, give it away or donate it.  I find I can keep rooms clean and neat, but getting them there is difficult.

3 - Put hinge pins on the Ford so I can close the passenger door without having to lift it up all the time.  That was welcome, but it took a day to recover.  Lots of little movements with some weight hanging off my arms.  Quite tiring.  And, the bushings are due today so I can get the strikers to stop banging away when I drive.

4 - Got the parts for the front fuel tank.  Just waiting for no good reason to fix that up.

I usually wash it and cut it into fourths for ease of handling.  I dry it off  after rinsing.  Mix the mix and half goes in each bag.  I usually just put it on the meat side and slap another quarter on top.  Into the fridge for three days minimum and flip the bag daily.  After that, freeze 3 and use one.  I like it, so does my sister.  I found a pound of store bought in the freezer the other day and it didn't hold a candle to this simple deal.  Sometimes I add a couple table spoons of coarse black pepper.  Helps to sweeten my personality.

5.6 lbs of pork belly was over 30 bills this last time.  I may have to start in on the tree rats. 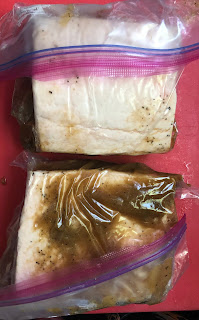