What do you even call that?

I read a post over at BRM, and it started me thinking.  I've been doing something for a while now, that I find immensely enjoyable.  I don't even have a name for it.  Maybe facilitating?   Who knows....  Here's the comment I left over there:
I work for a major shipping company. We have seen our Christmas level volume since the lock down. I was just at a major location 2 days ago, and packages were stacked everywhere. The volume on Monday was overwhelming.

We have a mom and pop hardware store in town, and I hesitate to buy anywhere else. They have a lot of what you need, and can order in if you don't. The truck comes mid week. I know I could probably get it cheaper online, but I haven't yet.

I started "networking" with folks I meet now... An electronics engineer that is on his pension and working as a security guard (terribly underutilized, he is brilliant), a welder that just started a business a few months ago.... I aim to help them find work, keep an eye out for opportunities, as well as learn what I can from them and hopefully reciprocate with valuable knowledge.

I don't know if that even has a title... I'm working to facilitate as much as I can. At this stage of the game, it seems to be what I do best. I find things that others need and hook them up. Case in point: I wound up with a bunch of old western magazines from my dad, and found an author that could use them as background for his writing. I got such a charge from passing those on... it started a new chapter in my life. (no pun intended, but if you want it, it's yours, proof reading not included) I found some equipment that was about to be scrapped and got it to the welder as he needed it to do a project. His margin will be better with free material, and I traded for some welding lessons.
As the landscape shifts due to societal, microbial, and normal change, being aware of alternatives is important.  How do I add value to my circle of influence?  This has become important to me.
I'm still working to find a way to pass on the skill set I have.   My kin have their own bent, so it has to be outside the family.  And I'm up for it.  We'll see how this plays out.  I'm starting to get excited about the possibilities....  May starve to death, who really knows....
Posted by STxAR at 18:14 2 comments:

Too Important to miss

This guy gets it.  I have been on the 'net since 1993.  I had a buddy that let me use his UofH account to surf around and read the usenets...

I Myspaced and Facebooked for a little while, but it was too constraining and appeared to be engineered to drain all my time.  Thank you, no.

...the Social Internet is the frontier, the Agora of Athens, the Senate House of Rome, the Mead hall of the Vikings, where free men and women greet each other, exchange ideas, treat each other with the respect and measure due free individuals in a free society, where the individual matters as much as the whole, if not more.

Go, read the whole thing.  (RTWT)  He is a deep thinker, and I need to read folks like that to help me grow. 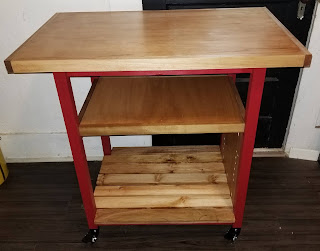 On this one, I measured, cut, test fitted, and then finished the piece before final assembly.  The finish looks a ton better.  Still need to Deft the top, middle and bottom.  But Hanna may come for a visit, so, I'll wait for less chance of solid humidity.

Here's where I got the plans.

I really enjoyed the project, now it's time to clean up the shop.
Posted by STxAR at 07:31 2 comments:

What a great year.  My bright idea to post every couple days has hit the skids.  I will attempt to do better!


The head is still working.  However, I am more attuned to nature than I ever was before.  When the weather starts to change, or there is a storm coming in, my head goes wonky.  Happens when I get stressed out, too.  Stress that results from conversation almost 99.9% of the time.  It's hard to describe, but it feels like ripples moving from left to right behind my eyes.  Makes concentrating difficult.  After work some days, it's all I can do to stay awake until bedtime.  Again, the stamina isn't quite there.  Other days, I run at 100%, usually during work hours.  Weird and frustrating.  I've done the service calls: MRI, EEG, CAT scan, all negative.  I guess that means it's microscopic.


I have really not trusted my self around rotating electrical machinery since April 4th.  Hard to budget machine if you aren't in the shop.

So, I decided on the little kitchen rolling cart project for my grand daughter. Almost done with it.  Lots of tough evenings, that I couldn't do anything without ruining what I touched.  I've bought enough wood to make two if one is scaled down to remove poor cuts.  So I'm doing it.  I want one of these, too.

Fridge took a dump, so ordered a new replacement.  Only a three week wait!  A chest freezer would be three months or so.  Glad that was purchased during the sanity before the current practice for leftist tyranny.  I got a  model designed for garage use.  I keep it on the porch, in the heat, so hopefully this will last a bit longer than the last one...  Yeah, I doubt it, too.


Have you seen this?  This is a very good introduction to precision measuring.  I have some of those Jo blocks, and some space blocks.  Maybe a math lesson tomorrow on angles and such.  Hmmmm.....

Here is the blurred out part of the women using standards.  Over time, the standard will wear, and lose it's precision.  It will need calibrating or replacement.

We are standing on the shoulders of GIANTS.  We can get precision measuring for the price of a fancy meal.  We live in a magic time.  A time that is taken for granted by a large percentage of our population.


half the population doesn't know or care how things work, or how to keep them working...  sadness

Sometimes I feel like an anachronism.  I want to understand the how.  I want to understand the why.  I want to be able to make and do.  Not just use and discard.  But I'm here right now, just as you are, even if we don't quite know why just yet.  I have a firm belief that we are here for a useful purpose.  And these things that fire my curiosity and imagination are important.  Somehow... for a reason... a reason that I may not understand just yet.  But I'll be dipped if I quit before I do what I can do.

So, one of the guys who reads this attempt at coherent thought left a comment, and I figured I'd show you what I'm working on.


the poplar at HD is labeled hobby wood, but it was good for this project.  Harder than pine, it's my first foray into hardwood cabinetry.

I started using pocket holes for screens and shelves several years ago, so it made sense to work on this little project the same way.

My work space is very limited.  I have a metal shop out back, so I 'borrowed' the front room to use for this quick project.  That has stretched into a couple weeks so far...


It's nice to work in a semi-conditioned space for a change.  Most of my work is shade tree.  But there have been some.... changes that make this an available space.

I dabble in a bit of everything.  I'll get back to the machining soon enough.  Thanks for stopping by.
Posted by STxAR at 20:56 4 comments:

Gravy, June flew by.  And I have been busy, too busy.

The head is still goofing off some days.  I guess this will be a long term battle.

Family issues are up in the batter's box, and I'm not sure how that will work out.  I'm kinda hoping they just take off the cleats and go home.

I feel like digging a hole and pulling it in after me some days, but that won't do anyone any good.  Millions on welfare are depending on me....

I will try and do better on posting my tool woes.  I've been working on a project that'll probably go to my grand daughter.  Take a peek at the artist's misconception:

She is a baker, and knows her way around the kitchen.   I'll post a pic when I'm done.  So far I've been making kindling instead of building the thing.  Lots of rework due to crossed eyes maybe....