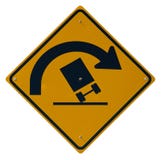 When I was running the roads for my Uncle, I chanced upon I-10 out near Orange, TX.  There is a sharp curve there with a sign like this.  Unfortunately, the 1985 Astro Van (it was a roach motel and had no room for my legs)  decided to puke the power steering belt a hundred miles before that sign.  It was somewhat manageable if I kept my speed down.  A good friend once told me the easiest way to maintain a safe following distance is to never exceed the speed limit.  That worked on that trip!

Hitting that curve though? Man alive.  I had my four way flashers on, limping on the shoulder, and I had to yank that wheel to get it to move.  Too many u-joints in the steering gear for Armstrong steering.  Then, I had to yank it back to straighten out.  I did a very good physical rendition of a integral on a function.  Lots of tiny straight segments that approximated a smooth curve.  Well after midnight return on that trip.  Side note:  the last time I used that van, transmission shelled out on it just east of Austin on 290.  Second gear, 40 mph all the way to Hobby Field.  I drove it as fast as I dared.  It was TOAST when I got there.  Good riddance to bad rubbish.

Well, the welder mod is off.  The plasma table job for Wednesday just tripled in size and the project manager decided that no extra time was required to accomplish it.  The table operator doesn't have the horsepower to make any decisions, so he's getting ready to burn some steel.  That's real money coming in, so it goes to the top of the line.  And the mod will be done by someone else.
Since you are here in the waiting room, how about a nice magazine to while away some time while I run around in a tizzy? 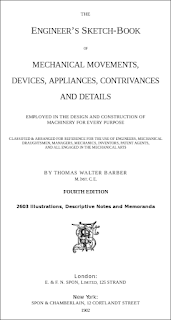 One of the curses of having a pickup is everyone wants your help moving something.

One of the curses of having a lathe and / or mill, is people finding out about it.  Welder bud asked me to fix a HF mig welder last year.  He wanted to put a different gun on it, so I made an adapter.  It worked for quite a while, then it didn't.  He  asked me to mod the welder.  I asked for the old parts, "well it wasn't working so I pitched it."  Way past finding now.

more below the fold:

Turns out the job that I heard about required a relocation about half way across the country.  I'm not able to do that right now, so, it ain't for me.
To all you who prayed for me, I am obliged.  I do appreciate you standing with me.  More folks in the org know I'm looking, so hopefully a remote desk type job will show up.  If not, I got gobs to do around here getting everything in order anyway.

I finished up the hardware and ran a tap through the back plate holes.  She's clean and ready for another 50 years of work.  I need to clean the jaws, then put them on.  I'm not gonna mount it to the back plate  yet.  I have a boring job that it'll do well at.  It's got to mount to the mill table, so flat is where it's at.
Seems my welder buddy bought a cheap HF welder, and wants to try and convert it to normal Miller or Lincoln MIG guns.  So, I have the recepticle and a replacement MIG gun.  Just have to adjust the size a little and it's online.


The only question I have is whether or not there is enough meat on the part to allow me to bore it to size.  THAT is a major question.
More below the fold:
Read more »
Posted by STxAR at 13:45 8 comments:

John in Philly is killing me.  His puns are loaded and ready.  He got me with "Chuck Roast" in the comments.  It's a groaner, but I laughed anyway.

Cleaning ye olde Polish chuck went smoothly so far.  I sprayed some of the leftover grease off with brake cleaner, then put the parts in a bucket with Zep 505 and poured in boiling water.  It was nearly 80 degrees outside so, the total temp change on the chuck was about 135 degrees.  We are aboot 400' ASL, so I don't derate the boiling temp of water because the pressure isn't quite 1 Bar.

Hot water rinse after tooth brushing them. Wiped the parts down with paper towels and put on some spray Rem Oil.  I found that oil really cheap a year or so ago.  Didn't want any flash rust or GREASE!

I decided to run a little diamond hone around the razor edge of the chuck.  I did two swipes on three angles using the backing holes as distance markers.  6 total swipes.  I just broke the edge a touch so, no more skinned hands.

I still need to clean the pinions, the jaws and hardware.  I also need to dig up another cap screw for the backing plate.  Then, it'll be on to tearing apart the mail order quick change gear box to make the lathe ready to use again.

I got an email from a buddy at the main campus of the old job.  He mentioned a desk job that is unfilled.  Hard time finding anyone to do it.  I asked him to sound out the manager, so he asked about it, since I can't login to our corp stuff (I have a feeling they do that so you are worthless when you return.  I'm totally out of date on my old job, so much has changed.)  He sent me the boss' email.

I shot over an introduction, and dropped two names he would know.  He shot one right back.  "I know you!"  That was kinda cool.  Call tomorrow to discuss the job and see if I can / should apply for it.  It's like a technical writing position on some systems I used to support on the dirty hands side of the phone.  Not altogether unfamiliar.

If you are a praying man, please do.  This was just a bolt from the blue.  I have to pursue it, might be a heavenly gift.

Massive Update (well, at least for me)

It is amazing how fast time is going.  So here are some bullet points and other news.

Finished out my short term leave, still unable to do the old job, so I'm officially displaced, now on long term disability.  Still an employee, just on the injured list.  If I get back to workable condition, I'll have to hunt up a job within a couple months of the "ready for work" diagnosis or I get released.  Free agent or unemployed?  Not sure which is more accurate.

Original issue was it locked up when I was attempting to use it.  Then I encountered a stuck cap screw.
Leigh over in upstate NY sent me an email that buttressed my thinking.  Carbide endmill into the stuck cap screw and it is done.  Back plate is off, and the threaded portion was just finger tight.  Eased out no issue.
Those three threaded holes in the back plate are for jacking screws.  I was figuring metric since it was made in Poland, but they were 5/16.  Common bolt, and it worked as designed.  (Thank God!)  No metric fasteners on the unit.  Relief!
Pictures below the fold!
Read more »
Posted by STxAR at 12:26 16 comments: