Life happened since the last post.  Everything got in my way.  I had a trip laid on this week.. Canceled.  I had a hot job come in.  Got that out the door at 1130 today, just in time to put new skins on the Zoomie Ferd.  I may take it next week on that trip, unsure about that though.
Therefore, the Canadian Bacon languished in the brine for 6 days.  After I returned home, I got out the Big Chief Smoker and set everything on Otto Pilot.  First up was the last of the Hickory chips....  Then about two and a half hours of modest heat followed by Apple chips.  I removed it, let it rest a bit.  I didn't cook it in the smoker, it's mostly a cold smoker.  And this loin was ten pounds. 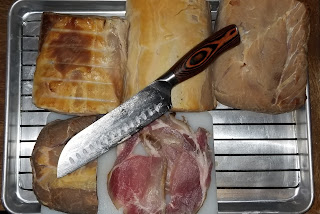 I whipped up some cardboard tube biscuits, heated the meat and had a snack.  WOW!!!! 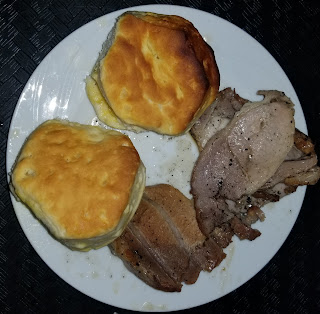 That smokey end piece reminded me of smoking grape vine.  I'm just hoping my tongue doesn't swell up like that again.  I wondered why the scout master didn't stop us.  He was only there to keep us from having fun, and he didn't make a peep while we were smoking our way through the pile we gathered.  Next morning, my tongue was so swollen that drinking water was harsh.  I guess he had fun that weekend.  Laughing at all the hung over scouts that learned ALL about grape vine.  One and done.
It's been an hour, and my tongue is still upset at me for the tailgate I ate.  It was almost like eating the smoke out of a chimney.  There was a bit more flavor in there than that.  I figure the farther I get into the loin, the better it will be.
I decided to finish it off in the stove.  I'm letting it soak at 200° F, until the internals hit 150° F.  I think that's kosher for pork. Wait.....
So, to summarize...  six days in the brine, four and half hours in the smoker, unknown amount of time in the oven to finish up.  First taste was a tongue spanking with a hickory hammer handle, followed by some undertones of Canadian Baconesque notes.  It has all the subtlety of a nasty loud fart, on those sounding board desk seats we had, during a final exam that is 90% of your grade, that wafts a hint of mercaptan for the remainder of test.  It is really hard to concentrate on anything else right now.  I ate it over two hours ago, and it is still..... there.
I'm gonna call this Filthie Bacon.  It definitely is much more potent than Canadian Bacon.  Ten wonderful pounds of Filthie Bacon.
I wonder how it would taste drowned in pineapple on a bread crust with spicy tomato sauce sprinkled with cheese.  I could cook that in the oven for a while..... at least until the cheese melted.....
I gotta go fix this tongue.
Baby Sour GIFfrom Baby GIFs
Posted by STxAR at 7:58 PM