I still haven't finished the Tumico Terrors.  I found the metric ER16 collets needed to be torqued a bit too much to grip, so I found some el cheapo ER16 Imperial sized collets for not much coin.  Ordered and finally arrived.  How do you store them?  I mean, they aren't very big atoll.  I dug a bit on Thingiverse.com, and found a neat little box.  A bit of additive machining... (3D printer), and it squirted out this.

Had a quick trip to the third coast, and couldn't resist my pawn shop rounds there.  Each of these were about $5 or $6....  Less than 25 bucks invested.  Neat! 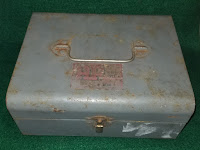 Some treasure in there as well!!  Who makes CDC brand drills?  The two largest  rows in the index are CDC brand, HS, USA.  Ex-Navy???? 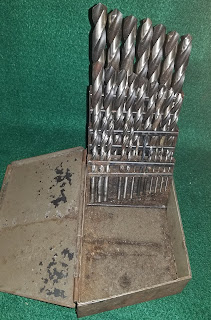 Also a bit of misc stuffus....

And some cheapo tools in the metal box....  What could I put in there instead??


Lots of fun stuff.  But I gotta get back to the Tumicos.  Almost done with them....