Quick tips on marking out

I bought some real marking out dye, red and blue.  Blue in a spray can that lost pressure and put out 20 times too much.  And some red in a bottle.  That seems to get all over me when I use it.

Years ago, I found out that blue Sharpie markers make pretty decent marking out dye.  I bought a box of 10 or so...  I still have a few left.  And 5 years hasn't been kind to them.... 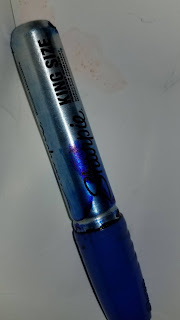 I got this all on my hand. I tried some turpentine, and smeared it all over my palm and two fingers.  I found some IPA, isopropal alcohol to you and me, and it cut most of it off.  Oh, hey! I found a cut I didn't know I had!  Noice.

The blue seems to build up when you go over it a few times.  The black seems to strip off what is down already.  I like blue better anyway.

I have some cutting to do, so here is the kit. 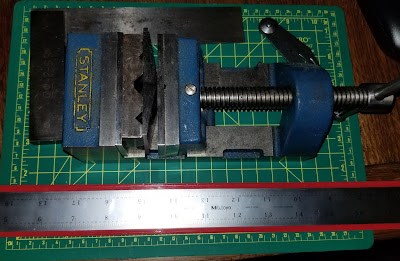 Not shown are the leak-o-matic marker and a Professor Pete approved visor.

I used the firm joint for a scribe, it's was sitting right there asking to help. 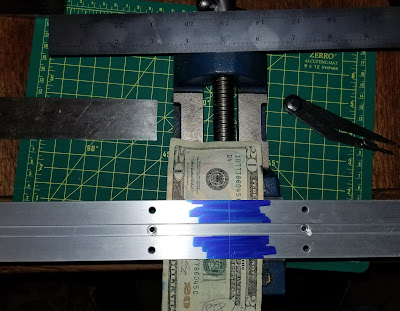 Don't fight with the part you are trying to hold.  Especially if you are trying to be accurate.  I didn't and I was.  That Stanley vise was a great score on 'bay.  I was shocked at how cheap I got it.  Paid about the same for the swing jaw and grooved jaw.  Got impatient, so paid a premium.

The profile wasn't tapered, but it didn't like the smooth jaws, so a scrap paper liner firmed up the grip.  I like to use what's handy, and the bit of cloth in the paper helps, it seems.

That green paper used to fill up my tank with gas.  Something changed though.  The gas didn't get better, or bigger.  The tank on my truck didn't get bigger, but the paper doesn't seem to fill it up anymore.  I measure the paper, and it didn't get smaller.  Plus, it still has the same number on it.  I guess it just doesn't pull as much weight as it used to.    Might as well use it for something constructive.  The folks that made it seem to want to take that away from it...

Those marks are within 1/64th of where I wanted them.  And that is good enough.  Now, I need to find a hatchet to cut it, a hammer to fit it and a maybe some self-tapping screws to hold it down....